London… We have arrived!!!

It was a four-hour flight from Mykonos and we left at four in the afternoon so that takes us to eight but with a two hour difference it brings us back to six. Then we had to get to the apartment and of course we were running on Greek time so add another two hours.

It was Heathrow…It was madness. The queues were incredible- an hour at passport control then an hour for baggage collection and then we had to work out where to get the tube. We were unfamiliar with Terminal 5, but we soon discovered the lift to take us to the Picadilly line and we were on our way. It was still light when we reached Covent Garden and despite it being a Monday it was incredibly busy. Five minutes trundling our gear and we were buzzing number three at 187 Drury Lane.

Oh so it is on the top floor. No lift! Oh! Well the good thing is that we will have days before we haul our luggage again and that will be downstairs. Lovely high ceilings means lots of stairs -sixty-six and then another seventeen to the bedrooms in the loft- and the European penchant for economies of space means that the stairs triangulate at the turns. Always interesting when you are laden with luggage.

Our greeting was wonderful. Nev, Cathy and Lara had arrived at different times of the day and had settled in. Apparently the flat is leased to members of the Royal Ballet during the season as it is so well located to Covent Garden. It was lovely – two bedrooms upstairs each with an ensuite and a toilet and vanity downstairs. I had organised the flat and was a bit disappointed when I found out that there was not a sofa bed as I had thought instead a mattress on the floor. Lara was not fazed. She assured me that she was happy, considering the room was larger than her entire apartment in Hong Kong. It was well appointed and even had a washer/dryer. We were going to be very comfortable. 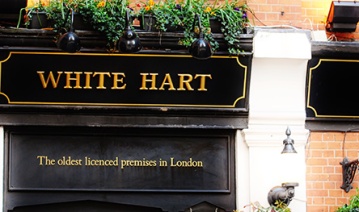 We were tired and a bit jaded so obviously it was time for the pub. Nev, Cathy, along with Lara were not going to miss an opportunity. We headed downstairs and took a moment to decide – yes the oldest licenced pub in the UK- The White Hart- was on the corner just twenty metres away. It would do nicely.

As was our habit in Robion, we shared a substantial breakfast and discussed our plans. Our priorities were different and different priorities meant we got to share our day’s adventure in the evenings. Our ten days in London were manic. 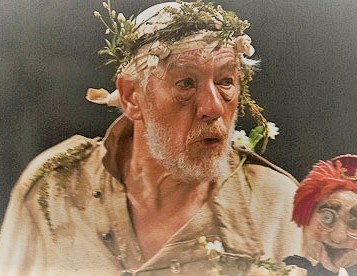 Firstly theatre -King Lear with Sir Ian McKellen – of Gandalf fame– a tragedy of monumental duration – three hours fifteen minutes; Motown -a toe tapping singalong with amazing choreography. Stand-up comedy with Rosie at the Top Secret Comedy Club- Ummm not all decisions are good ones but it was free. Fringe out at the Brockley Jack- The White Rose- tiny 50 seat theatre, amazing production. I cried.

Museums-The Rodin Exhibition at the British Museum. As I have said before- not all decisions are good ones. We chose the first day of the holidays. The crowd was ridiculous. I asked a security guard at the gate how many people were in today and he thought for a moment and said, “…Ummm about three million.” We laughed. Ahh a man after my own heart, one with a tad of exaggeration about him. “The Future Starts Here” at the V&A captivated us for three hours and then another two hours roaming around the museum until I thought my brain was experiencing serious overload and John decided to take me home. 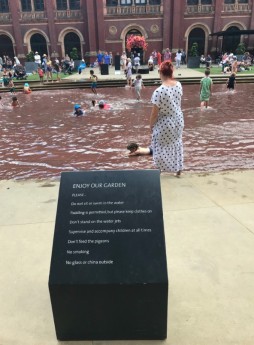 The crowd at the V&A

The crowd at the British Museum

Spitafields Markets old and new- antiques on Thursdays- good, got that one. Roamed the streets around Brick Lane and then on to Shoreditch High Street and the Box Park-about fifty shipping containers turned into pop-up shops. Found fabulous graffiti and fantastic garments, hidden gems and surprising spaces.

The contrast with Selfridges where I was playing with a £3000 Balenciaga handbag then to walk out on to the street and be confronted with homeless people dirty and destitute surrounded by their miserable belongings made me feel really uncomfortable. I am sorry I was not able to catch up with Anastasia who works at the Surrey University at the Centre for the Understanding of Sustainable Prosperity. There would be so much to talk about.

Met up with family and friends – dad’s cousin’s grand-daughter for lunch at Granary Square on Regents canal and talked ancestry. 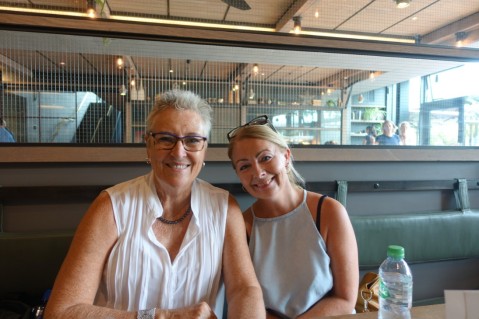 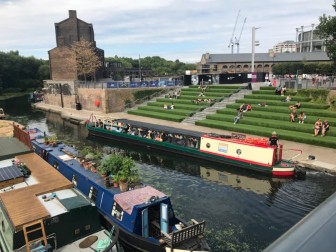 A couple of days later met up with Dawn at Greenwich for drinks. We have been in touch online since 2001 and decided to meet in person. We share a name and a common ancestor but have not made the connection as yet but after meeting we were convinced that it has to be there.

Drinks and dinner with old colleagues and a young Australian making his mark on the city.

Kris showed us some amazing street art in a tunnel just outside Waterloo Station.

There were random incidents such as the woman in crowded Covent Garden who had had a fall and was bleeding profusely from the back of her head. Initially I thought it was from her ear and was very concerned. She was obviously under the influence of something, but I couldn’t smell alcohol so not sure but the pearls and the Furla bag suggested it might be pretty exotic. She initially railed at those trying to help and was quite vitriolic, but I was able to convince her to sit quietly and let the dizziness pass. I was wearing a voluminous white shirt. She probably thought I was an angel. She was incoherent and raved on about how Mummy and Daddy would be furious. I am not sure if she was aware that she was well into her forties and so I focused on keeping her seated as she kept telling me, and all around, how she was perfectly fine. Eventually she decided she loved me and gave me a big hug. I was relieved when the security guy from the nearby Covent Garden Underground station turned up and was calling for back-up. I disengaged and continued to Tescos to get the makings for our supper- toasted sandwiches and a bottle of red. The blood came out of my shirt- I never travel without eucalyptus oil and Sunlight soap- magic stuff.

We finished where we began-London- the city that always enchants, enlightens and engages me. It was such a treat to share our experiences with so many fabulous people and if the stars align and opportunity presents itself, we will be back. 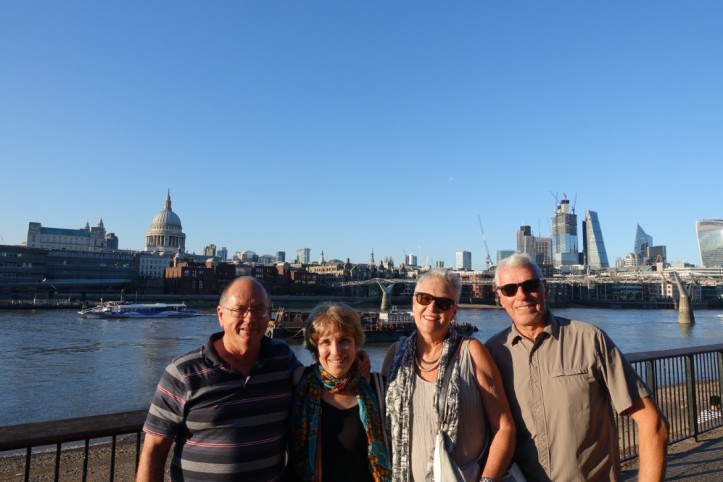