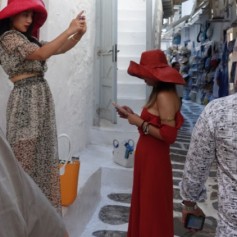 Mykonos is a SCENE!!! The young men strut, wearing not just the right clothes but very carefully selected branded accessories…and this is not to impress the ladies….the ladies on the other hand..botox their lips, extend their eyelashes, wear ridiculously high heels and sunglasses that defy description but definitely attract attention. These young things are hoping to ensnare a rich beau. The rich beau hoping to ensnare an opportunity… 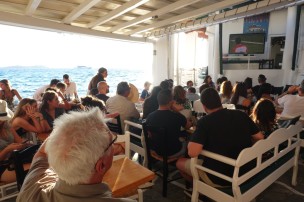 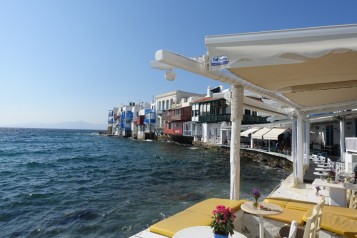 Lunch, and she made an entrance. I mean she really did. She indicated exactly which table she would have, her black lace cover, discreetly caressed her golden skin, her fabulous straw hat covering her and the nearest two or three others and her two boys are just divine. The elder, probably about ten, supports a diamond earing, a Pandora bracelet accompanied by a carefully selected designer watch and another exotic bracelet…yes I’m describing the ten year old- his reflective sunglasses hang carelessly from his white linen shirt with matching pants and white Havaianes- his ensemble complete with blue ankle lace. Baby bro in his Abercrombie and Fitch navy polo, sits quietly. Both are absorbed with their games on their iPhones. They eat…Greek salad and grilled salmon…shared. Clever choice. They tuck in…all using their fingers!! I didn’t expect that. 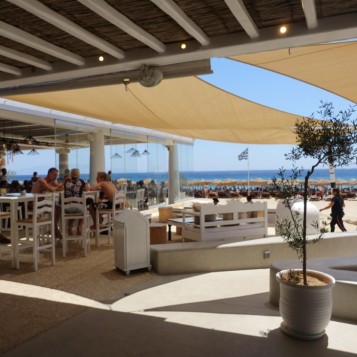 So if you can’t beat them…. Elia must be the quintessential hedonistic beach club. We took the bus. We had lunch. The food was delicious. The setting was insanely beautiful, and our table was the best in the house. Afterwards we hired sunbeds and an umbrella. We had to order a Mythos. It was delivered in an ice-bucket. We swam, we drank, we dozed. Oh!! this is the life!!!! I can handle this.

The day we were to fly out I organised a trip to Delos. It should have been perfect. The tour left the port at ten and returned at two. We had time for a leisurely breakfast, wander down to the port and then return and have plenty of time to get to the airport for our 1620 flight.

I should have known it wasn’t going to work out as easily as that. Firstly, John was out of sorts and disorganised- very unusual. I went to breakfast without him. He did turn up later but he was still not happy. I had the tickets for the tour but needed to check the time, boat and guide information with Jenny at the desk. She assured me that if we left at 9:20 we would have plenty of time, what she failed to tell me was that you needed to check-in before boarding the boat. So back to the ticket office.

Our trip out to Delos was just half an hour. I was all ready worried about out flight. I tried to check-in online but BA’s site was so confusing and while trying to see if I had paid for baggage I somehow checked in. So now I was worried about the amount of charge in my phone as it had the boarding passes, whether or not I had luggage and of course if we ran on Greek time everything was going to be terribly tight. 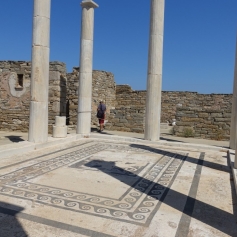 Delos was amazing. It is one of the most important historical and archaeological sites in Greece and the mythological birthplace of Apollo and Airtimes. Evidence of human habitation of the island dates back five thousand years and in the first century BCE in was a city of 25000. It was remarkable, and our guide was excellent.

Leaving Mykonos was interesting. We decided to catch the bus- not a good decision for someone as stressed as I was at that moment.  When everyone is a prince/ss, deserved, fabulous and special this can result in unbelievable chaos- especially at a congested traffic junction which has a major bus stop, a taxi rank, hire vehicles, shuttle bus depot and cafes. I was struggling to believe the level of “I alone exist” with buses, cars, scooters, quad bikes, taxis and pedestrians all vying for right of way.  The bus was late. Despite the pandemonium, we made our flight with a whole five minutes to spare thanks to a marvellous man on the check-in who totally understood “customer service” and hastened our progress. Not everyone in Mykonos needed to be the centre of attention. 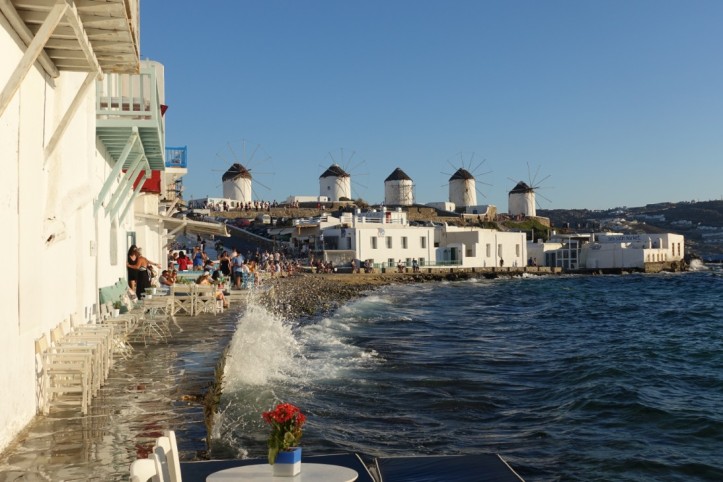