Bonifacio and the Bus Driver

The physical setting of this ancient city is spectacular. Perched on a small platform mounted above soaring limestone cliffs, this stone village is protected by a huge sheer wall of sandstone, ramparts, and towers. The narrow peninsula juts into the sea and almost encloses the finger of deep water which offers a select few, protection from the elements. Apparently, Bonifacio is the windiest place in France and its location would attest to that.

But first the port. OK, John wanted to go to the port. Harborside Bonifacio was lined with grand cruisers, enormous yachts, all spectacular water craft, safely harbouring from the terrifying winds we had just experienced on the open water. Apparently, the winds were blowing at 140km/h the previous day which explained why the ferries were cancelled. Our crossing was rough but the distribution of the sick bags was adequate and there were only a few who found it all too much.

We trundled the few hundred metres to the port village and found a café where we had a beer and lunch and watched the passing traffic. John was enchanted. I was bewildered. How were we going to surmount the obstacle that was the bastion of Bonifacio? Hundreds and hundreds of stairs and then a significant walk separated us from our hotel. 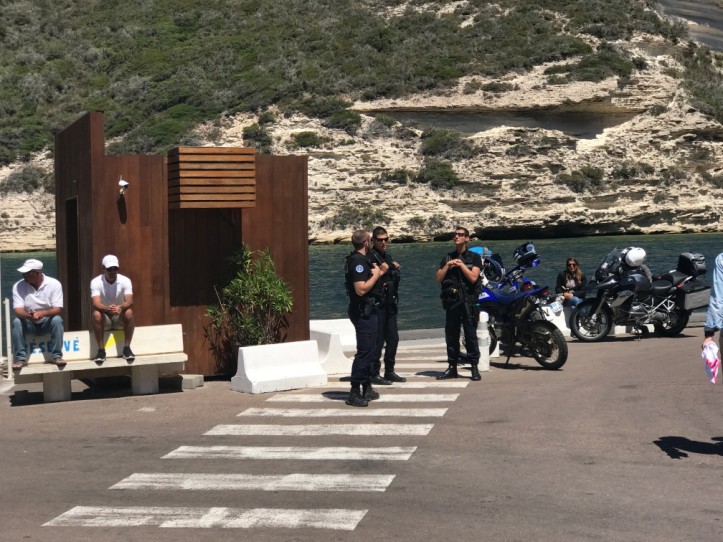 We asked the gendarmes at the port how we should get there as there are five taxis in Bonifacio and they were busy. He suggested we would need to walk. He looked at our luggage, took into consideration our age and propensity for hard work and suggested, “Probably fifty minutes!” Nah…that is not going to happen. I called the hotel for advice.

They sent a driver. I couldn’t believe our luck. What a terrific hotel. Hotel Santa Teresa, isolated on the end of the peninsula, was just lovely with a special quirkiness and a distinctive sense of style. We were enthralled. 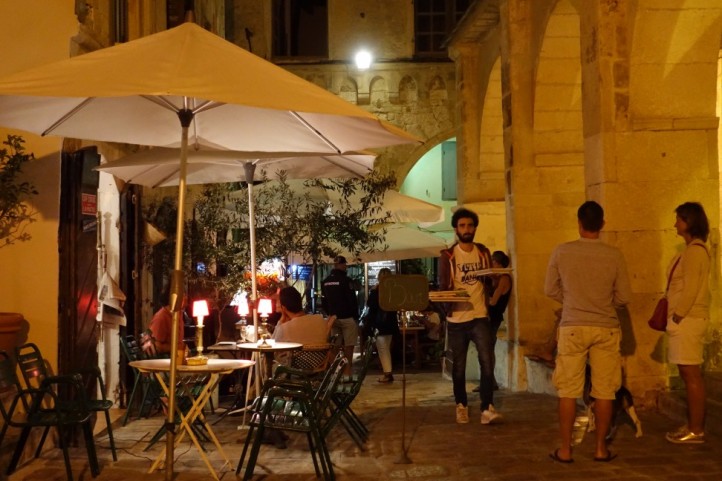 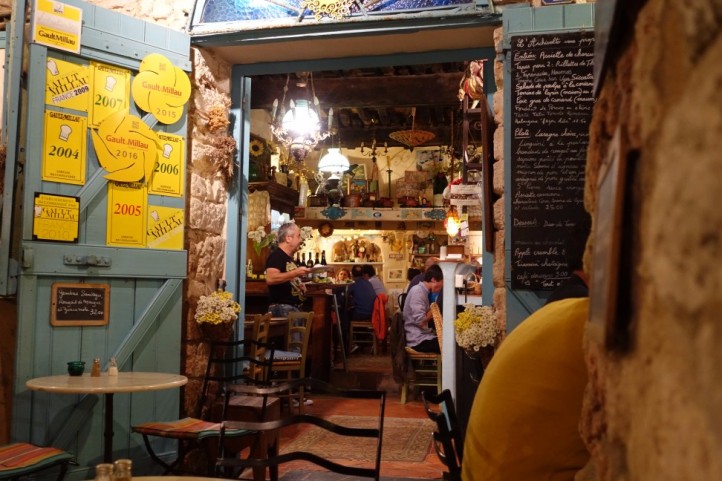 This fabulous place and just one day..not even. We arrived at lunchtime and our bus was early the next morning. We had to squeeze in as much as we could. We were enthralled with the surroundings and totally entertained wandering the streets of this ninth century fortified citadel.

The night manager was organised to drive us down to the port the following morning to catch the 7:30 bus. He finished at seven so we promised to be in the foyer by 6:45. I was expecting a dapper Tom Hiddleston type character dressed in a suit and tie but there was Eddy dressed in an old pair of dungarees and sandals helping us load our luggage into the back of his farm truck and clamber down the mountain to the port. We were incredibly grateful.

There was some discussion between Eddy and the bus driver so I assume he told him we would be getting the connecting bus at Porto Vecchio. Of course, it was a bit early and we asked the bus driver how much time before we left. It was the 7:30 bus but this is Corsica and it is summer. He was probably our age maybe even a bit older and his English was about as good as our French- pathetic!! He didn’t quite get our drift so called on a young woman, Mathilde, to translate.

The bus will leave in ten minutes. Get on now.

We sat patiently. Again the bus left ten minutes before the timetabled departure. We were not complaining. Surely we would get the connection.

We arrived in Porto Vecchio with a few minutes to spare but before we reached the port where we could see the connecting bus waiting we suddenly stopped. The bus driver spoke to Mathilde. We were to get out here, go to the café across the road and get a coffee. Ten minutes! That’s all!

John was concerned about our luggage. The driver shook his head and indicated the café. Obviously…coffee first!!! This man understood. He could see. He knew. Coffee first!

We sat and made small talk with Mathilde and had almost finished our coffee (espresso-so not a lot to finish) when the bus driver appeared. He grabbed the saucer with the bill and money on it, strode to the counter, there was a brief exchange and returned with the change which he gave to John. Without actually manhandling us we were coaxed out of the coffee shop and on to the bus for Bastia. 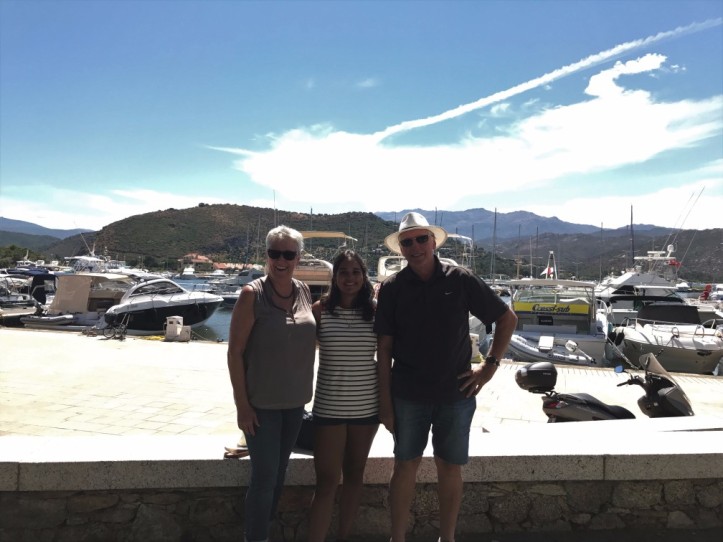 Our day was going very well. We had our coffee, we had made the connecting bus and we had made a new friend. Mathilde agreed to be our personal guide. She assisted with the negotiations regarding the hire car, took us for a walk around the markets at Bastia, directed us on the scenic route towards our destination and introduced us to a delicious pancake-like delicacy at lÏle-Rousse which I think was made with chestnut flour and had an orange flavour.  We happily took her to lunch and then to her place of work which happened to be almost next door to our hotel in Algajola. All up, a wonderful day.