In a bit of hot water…

The coach arrived on time at nine. It was a bit dilapidated, there was significant rust to give what some might call, character, and very few of the seat belts worked. We glanced at each other, mounted our mode of transport and instantly connected to the young Swiss couple and completely dismissed our potential for death as we travelled into the Argentinian wilderness. Well, I might be exaggerating a tad. The Termas was just half an hour out of town.

The roads in this part of Mendoza are not always even and the lumps and bumps encouraged the orphaned seat belts to swing and sway and clang against the side of the seats inspiring Michael to remark how much at home he felt in the presence of the Swiss cow bells. We laughed and launched into conversations about travel. They were just days into a travel marathon of the Americas. We agreed that five months travelling together would help decide one way or the other of the chances of the relationship surviving.

otel & Spa Termas Cacheuta, we were provided with towels and decided to hire dressing gowns to avoid having to change for lunch which was included in the price. The Termas was not too dis-similar to those we had experienced in Europe. We had a general understanding of what would be required so that did us in good stead. While we were told there were lockers, there were not. Instead we were given a large canvas zipper bag on a hanger in which we were to put our clothes and shoes. These would be left at the termas reception along with any other personal belongings such as backpacks with all our worldly travel possessions such as credit cards, cameras, phones and (deep breath) passports. Trust! Well it just has to be!!!

We were given a short tour and invited to indulge. This termas used the natural hot springs which bubbled up adjacent to the Mendoza River. In the first section the pools and water spouts had water at around 38°C and it was recommended that we indulge for no more than ten minutes at a time. There were contiguous ponds tumbling down the banks of the river each getting a little cooler.

Of course one of the first experiences we had to play with was the mud. We were like kids smearing mud over out bodies and then sitting to dry before an ancient contraption which blew air which we expected to be warm and unsurprisingly was not. We shivered but brazenly sat on rocks and pretended this was such fun. The best bit was the delicious showers which initially evaded the less adventurous as you had to discover which and what button to press and accept the surprising consequences. Once we decoded the holes in the wall which were the secret buttons to the sublime, we were delighted. 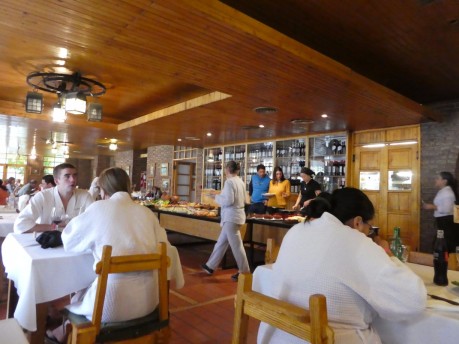 Lunch was significant. It was a type of Asado offering a multitude of meats as well as salads and all the other accoutrements one would expect at a lunch buffet. As with any buffet what you choose determines your level of satisfaction. I chose well. John was overwhelmed and on closer inspection decided it was pretty average. Our Swiss friends were not as satisfied at all. So that generally sums up a buffet.

We had a couple of hours before the bus was to pick us up so we lay around reading and then had to go exploring. Wow…we really didn’t realise how extensive it was and that it was a hotel as well. Ahhh that explained the number of people at lunch!!! This place had history and I found it very authentic and thoroughly enjoyed the experience.