Our first impressions of Cailar were not favourable. Frankly the little village appeared to be a demolition site with derelict buildings, ditches and deviations and total confusion as far as how to get to Residence Le Machu. Unexpectedly I spotted a small sign with the name of our destination. We were directed to an even more neglected narrow country road. We persevered. On arrival we were surprised to find just how rustic and country our accommodation was however our first impressions proved how not to judge a book by its cover. Our room was lovely. Our host wonderful. Our dinner in the village delicious.

We had an agenda. Well I did. I wanted to experience the essence of the Camargue. I wanted to see the flamingos and perhaps even see the bullfighting where the bull might be run ragged, but it is not killed. I was to discover the Course Camarguaise and the amazing raseteurs.

Breakfast over, we consulted our host as to the possibility of seeing the Ornithological Park and the bull running. Marie Laure advised us to go early to the park as it is excruciatingly hot in the middle of the day. After that we could have a look at the seaside town of Saint Marie Sur Mer then to the arena at Aigues-Vives. The event would begin at 1630 and entry would be €9. Again, she advised us to be early as it would be very popular.

Parc Ornithologique Pont de Gau was massive and by ten o’clock it was already getting very hot. We saw an amazing assortment of birdlife but seeing the flamingos at close hand was amazing. I had no idea they were quite so colourful, as we just glimpsed their vibrant underwing colours as a couple of random individuals took to the sky.

Saintes-Maries-de-le-Mar was a great choice for lunch with lots of little arcades and interesting moments to absorb our time, including what looked like the beginning of a hen’s night out.

Aigues-Vives was an hour and a half drive away and Google maps took us to within a hundred metres of the arena where we easily found a park because we were so early. There were to be consequences! 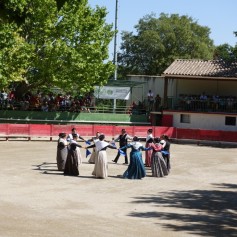 It was a smallish arena, completely surrounded by elegant plane trees that shaded the spectators sitting on the bleachers. We bought a beer each and headed for the nearest stand. Surrounded by locals all of whom were about our age and even older, it didn’t take long before I connected to Yvette who was keen to communicate through Google translate on my phone and fill me in on many of the intricates of this wonderful sport as well as the associated traditions and ceremonies. She was a gem. I felt very honoured.

I had no idea how involved and how extensive the competition was. Course Camarguaises are held from Spring to the end of Autumn and three or four times a week at three or four venues. The bulls are the heroes and those that prove themselves get glory beyond death including being burried and maybe even have  a statue dedicated to them.

The Raseteurs, the bull fighters, are professionals and go from one event to another earning their living risking their lives scraping bits of fabric(red ribbon called the cocarde) and string(ficelles), Oh yes and a couple of popm poms(glands) from between the ears of raging young bulls. Ummm…seems a very man/boy thing to do. Makes perfect sense and therefore they should be paid to do this. Ummm … not sure that I really get it but it is exciting to watch. 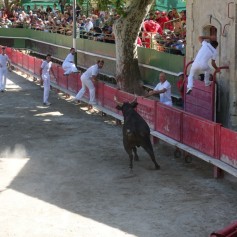 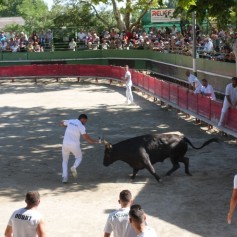 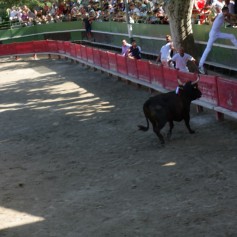 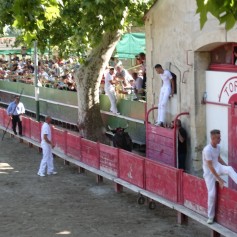 Turns out that we had arrived at Aigues-Vives at the conclusion of a five-day long Fete Votive 2018. Starting at ten in the morning with breakfast and music, it continued with lots more music until the finale du Sarment d’or, Trophee de l’Avenir  where the program goes on to mention the names of the stellar bulls that will be appearing and then the Raseteurs. Afterwards the running of the bulls through the town accompanied by the very talented horsemen and then more fun and festivities flowing into the wee hours. I was exhausted just reading the program!

Yes we left early. Our day was long enough. Of course getting the best park came at a cost. Most of the streets around us had been closed to allow for the crowds. Negotiating the back streets of Aigues-Vives was a nightmare but despite Google maps we managed our escape.

It was an amazing day and truly memorable, heightened by the wonderful warm and engaging local people of the Carmargue.