So why Argentina? Well…the flight was a bargain and I have always wanted to go to South America so here we are. It’s Saturday morning, we are lying in bed with C5N broadcasting the state of the Pan-Americana highway after a terrible fatal accident. It’s amazing how much you can understand when you combine words and pictures- context- it’s everything. Enough rest- it’s time to go and find out a little about this enormous city, Buenos Aires.

Well the best way to explore a city is on foot. We were well located in the Recoletta and decided to find a cafe and grab a bite. John had read about La Biela, a traditional old cafe with lots of atmosphere and plenty of locals gathered on a Saturday afternoon to mull over newspapers and discuss the news of the day. It was cool out, so there were few people outside and I gathered that they would have been tourists prepared to pay the extra surcharge for the privilege of sitting in the cold surrounded by smokers. Beats me!!!!

A hop-on-hop-off bus rolled by and we noticed an information kiosk just outside the cafe so we made some inquiries. Our last experience with this kind of tourist service was in Dresden and we were very impressed. We were to discover…Argentina is not quite as 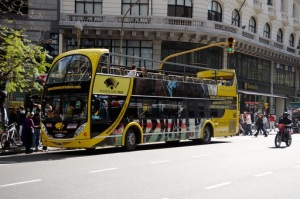 …um… organised???? The buses were supposed to be every twenty minutes but it was more like the London bus system where they seem to roam in packs. Despite our very very long “twenty” minute wait, we were well compensated as we met Monika, a travel agent from Lisbon who was visiting BA and attending a travel convention. Her field is Luxury travel, her company Lounge and she had lots of stories and was totally engaging.

John decided he needed to grab a bottle of water. Seriously? We had been waiting for over an hour and of course just as he disappeared into the melee a bus magically appeared. It stopped and the on-board guide let us know that they had no more tickets and no more headphones….they would not be taking passengers. What? We wait. Just seconds later another bus appears but unfortunately John hasn’t. Monika looks questioningly. I have to wait… she can’t. Well that is the end of that happy confluence of minds. A minute…no less …both John and yet another bus appear. We have touch down!!!!The price is a jaw-dropping (ARS490x2- about A$100) but the decision was made so we were off. Our plan was to stay

on the bus for the full circuit which was two to three hours. We were tired. It was a good plan. It was Saturday and BA was hosting the most important International Book Fair in the Spanish speaking world attracting more than a million visitors to this city of seventeen million plus…. The buses were busy. We were holding our seat….that was until…we weren’t. Around the Recoletta, down lane 1 of the fourteen (not counting the two on each side acting as ….extras?) running the length of Avenida 9 de Julio, Plaza de Mayo (where of course there was a protest) into San Telmo and la Boca (significantly past the famed stadium where Diego Madonna  began his career) and on through Puerto Madero, the upmarket new area of this teeming city. Just after Floralis Generica we arrived at the Museum of Arts. The bus stopped. “Get off”. I gathered their shift had finished. We were to wait. In the big scheme of things, it wasn’t too long. Our day was almost done and we had gained a tiny insight into this enormous and complex metropolis. Our confidence was growing. It is a big city and bad stuff happens. If we were to always listen to the naysayers who would travel? Who would explore? Who would discover?